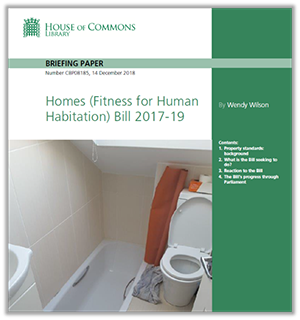 Is this act the opening of a door to take over from PPI claims With claims against landlords?

What is the act and what is its purpose

The act is simply an amended version of the ‘Landlord and Tenant Act 1985.

The legislation informs landlords they must ensure that their property is fit for human habitation at the beginning and throughout the tenancy.

Ensuring their property is free from hazards which are a risk to the health or safety of the tenant or another occupier of the property.

The landlord as an obligation to ensure that the property is, and stays fit for human habitation, this extends to all parts of the building to which the landlord has an interest, including the common or the retained parts e.g. roof, the external wall, communal areas and the entrance hall and stairwells.

Should a landlord fail to do so, the tenant has the right to take legal action against the landlord for breach of contract, on the grounds that the property is not fit for human habitation.

Who will the act affect.

The Act came into being on the 20th March 2019 so anyone signing a new lease after this date is covered with immediate effect.

Any in a current tenancy will be covered by the act from the 20th March 2020.

Anyone with a tenancy of longer than 7 years.

One of the most contentious areas of disagreement between tenants and landlords being, dampness and mould, these issues can sometimes be complex in defining when an issue is down to, excessive moisture production, or adequate ventilation could prove a grey area.

This being because the parameters which generally affect the environment we live in are constantly changing, structural changes to the property may have been undertaken without a correct assessment of the impact it will have on the internal environment.

Instructing a Pre-tenancy survey from a quailed surveyor, who can provide a written/ photographic report of the property condition before the property is tenanted.

Including an inspection and testing of the ventilation and back ground ventilation systems.

A follow up inspection of the property once it has become occupied, which includes consultation with the tenants, this allowing questions and discussion to be undertaken, so avoiding unnecessary conflict later.

An end of tenancy inspection, when a property is being vacated as this can avoid disputes relating to the return of a bond/deposit.

How Can we help https://www.olympic-construction.co.uk/services/surveys/

Olympic Construction are already working with a number of responsible landlords and property management companies, who recognise our expertise in this area and the benefits of having an inspection with documented evidence, before and during a tenancy to avoid conflict.

We can act on behalf of the landlord or tenant to undertake and inspection of the property and provide a full written report, which will not only identify the issues but also provided a solution.