Heritage or period properties are normally constructed of solid wall construction, with a lime mortar, these types of properties where they are located in exposed locations, such as at the foot of Saddleworth moor in the northwest of England, Yorkshire and Derbyshire  moors, can be affected by penetrating dampness, which results in the wall structure becoming damp, this can lead to both water ingress and condensation issues, has a wet wall structure, as a lower thermal value than a dry wall, so the internal wall surface is more likely to fall below the dew point temperature, resulting in condensation forming on the wall surface.

The walls also provide the support for the load bearing timbers of the floors, roof and lintels located over the window and door openings, if the timbers are located within a damp wall, over a long period of time there is a higher risk of these being affected by fungal decay.

As protection against decay, pressure impregnated softwood timber battens should be used and secured with non-ferrous fixings to avoid the deterioration and failure of steel fixings by rusting.

Where slate or tile hanging is used as a weather proof cladding, to a traditional solid wall  building which is normally heated, it may be  possible to install insulation, fixed to the wall behind the counter battens. Rigid insulation boards of organic or inorganic insulation can be fixed with a mechanically fixings through both the counter battens, along with a breather paper system.

The continuous layer of breather paper, is fixed between the counter battens and the insulation, this is resistant to the penetration of water in liquid form, but will allow water vapour to pass through. Its purpose is to protect the outer surface of the insulation from cold air and any rain which might penetrate the outer protection layer and to allow movement of moisture vapour from within the building to pass through it

Normally for a vertically hung slating system we usual use one of the smaller slates, such as 405 x 205 mm slate which are head nailed to 50 x 25 mm battens as these are less likely to be lifted and dislodged in high winds than longer slates would be. Each slate is nailed with non-ferrous nails to overlap two slates below, and double lapped by overlapping the head of slates two courses below.

At corners or angles and at the sides of openings, a slate one and a half the width of the slates used, is installed to complete the overlap. This width of slate is specifically used to avoid the use of a half width slate which might easily be displaced in wind.

Internal and external angles are also further protected by the installation of lead soakers hung over the head of slates to overlap and make the joint weather tight. Slate hanging is fixed either to overlap or butt to the side of window and door frames with exposed edges of slates pointed with mortar or weathered with lead flashings.
At the lower edges of slate hanging system, a projection is formed on or in the wall face by means of blocks, battens or brick corbel courses, on to which the lower courses of slates and tiles bell outwards slightly, to throw water clear of the wall area below.
Tile hanging is hung and nailed to 40 x 20 mm tiling battens fixed at centres to counter battens to suit the gauge of plain tiles. Each tile is hung to battens and also nailed, as security against wind.
At internal and external angles, special angle tiles can be used to continue the bond around the corner, as an alternative and also at the sides of openings, a tile and a half width, may be used, with lead soakers to the angles, and pointing to the exposed edges or weathering to the sides of the openings of windows and doors. 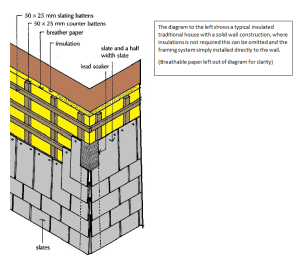 Owners of listed buildings can, in some cases, get grants or loans to help them with repairs and maintenance.

See what our customers say about us http://olympic-construction.co.uk/testimonials

If you have any questions please call us on Oldham 0161 633 9860,
Wilmslow 01625 900 800 or contact us and we will be happy to answer any of your questions or make arrangements to undertaken an inspection.
(Inspection appointments refunds are subject to a Minimum 24hr notice)