The wall tie survey and what exactly do we cover?

Normally the idea of wall ties never enters your head, until the point is raised within the home buyer’s report, when you apply for a mortgage or loan against your property.

Which is strange really when you think about it as, you have your car serviced or mot tested, at least once a year. 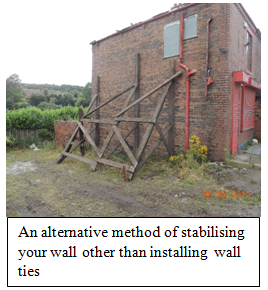 The need for a cavity wall tie survey can arise for several reasons:

Firstly, what type of tie should be installed, below are just a few examples as there are many to choose from dependent on the type of structure:

The need for a cavity wall tie survey can arise for several reasons:

1. You may notice a distortion, crack or bulge in your house wall and the survey may be just a precaution, to check that wall tie corrosion isn’t an issue.

2. The property may be up for sale and due to the age of the property, the issue of wall ties was raised by the surveyor undertaking the home buyer survey.

3. You may have heard of the problem from someone selling their house, or on the TV and done the wise thing of having your wall ties checked, before the issue became a more complicated and expensive issue.

So what will Olympic Construction do, when they arrive at the property to undertake a wall tie survey.

2. A full external inspection of the property will be undertaken, this is looking for any of the following points.

3. The type of property, ie semi-detached or terraced.

4. Have any extensions or alterations been undertaken.

5. Has cavity wall insulation been installed?

7. Any evidence of cracking, defective gutters or rainwater pipes, which will have resulted in water running down the wall.

8. Condition of the pointing to the external elevations of the property.

9. Note any obstructions, such as conservatory’s or pitched roofs which would prevent access.

10. The location of any chimneys, used or not we, cannot install wall ties into these areas. 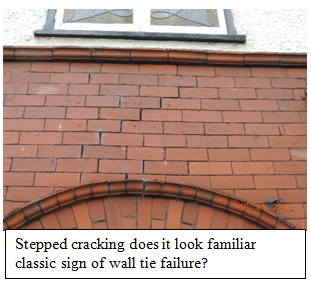 When this has been completed the external elevations of the wall will be scanned using a metal detector to establish the density and location of any installed wall ties. This is normally only done at ground level but may be required at higher levels in some cases.

The second part of the survey will be to drill a suitable hole within the external leaf, to allow a visual inspection of the installed wall tie within the cavity, using an endoscope. 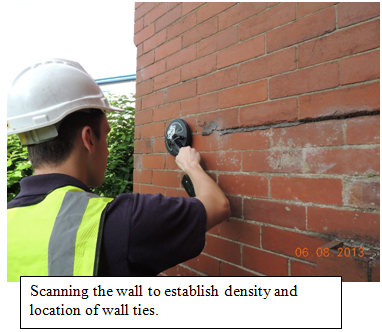 This is required to establish the following points 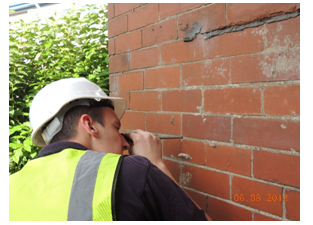 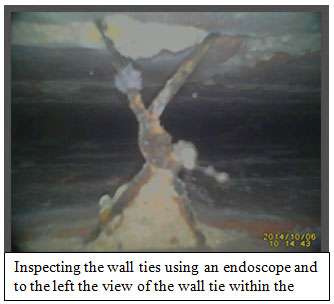 Other methods of inspection

So what happens when cavity wall insulation has been installed and a visual inspection of the wall tie within the cavity cannot be undertaken?

We still need to establish the wall ties condition or the lender is not going to allow the mortgage to go through.

We still need to establish the classification of the wall ties to establish what remedial works are required, and if isolation is required.

The experience and qualifications of the surveyor, to make an informed judgment, after taking into account all the information on site, such as the mortar type, exposure of the building or cracking or lifting of the mortar beds.

The survey is undertaken exactly the same as listed earlier, but instead of drilling the wall and using an endoscope, we remove the mortar around the brick, with a chasing chisel, and remove the brick. Following inspection the brick is then replaced, following photographing of the wall tie, and pointed up.

What’s the alternative to the above?

So how do we decide if the wall ties need replacing or not?

For many years, there were no hard and fast rules it was really the decision of the surveyor undertaking the inspection.

Then in 1995 The Building Research Establishment (BRE), issued guidance in the form of BRE digest 401 “Replacing Wall Ties “which set out how to visually grade existing wall ties and what to recommend (or not) depending on the condition of them.

BRE 401 sets out nine classes of wall tie corrosion, ranging from number 1: Bright and shiny – no problem, though to number 9: very rusty and laminating – urgent repair required. Initially, the visual condition of the wall ties is used to decide on what action (if any), is needed. 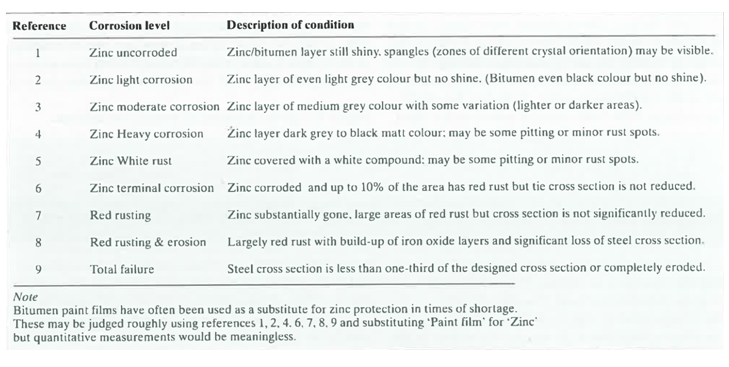 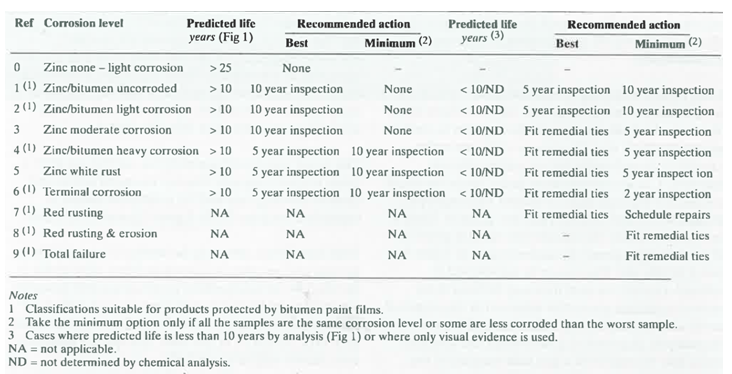 If you have any questions please call us on 0161 633 9860 and we will be happy to answer any of your questions or make arrangements to undertaken an inspection, of your wall ties to ensure your property is structurally sound. http://olympic-construction.co.uk/

If you have any questions please call us on Oldham 0161 633 9860,
Wilmslow 01625 900 800 or contact us and we will be happy to answer any of your questions or make arrangements to undertaken an inspection.
(Inspection appointments refunds are subject to a Minimum 24hr notice)