Most people are unaware there is a requirement for a building regulations / planning application for a basement / cellar conversions. 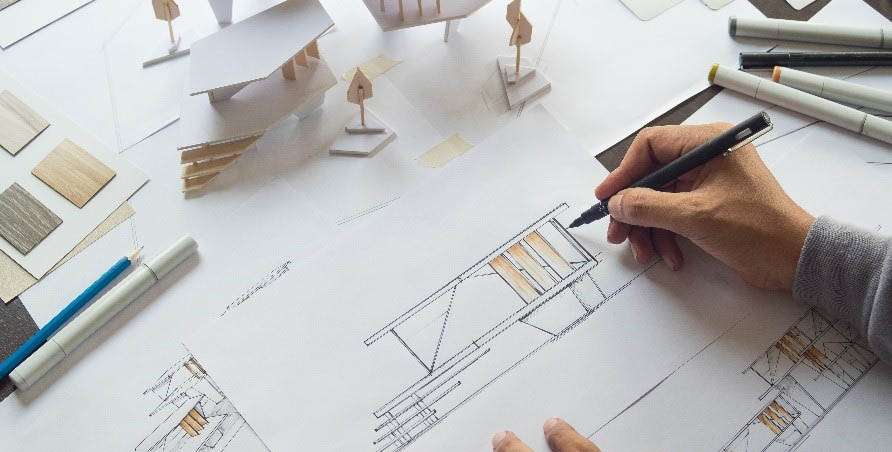 Olympic Construction have, Chartered Building Engineers and CSSW Certified Structural Water Proofing Surveyors, Registered on the PCA Waterproofing Design Specialist (WDS) Register, We have over thirty years experience of waterproofing and converting basements, designed to building regulations and BS8102-2009, with input from you, the client. Whether it be an extra en-suite bedroom, a playroom, a home office, we aim to work to the highest standards, so you can be confident you are instructing a competent, professional company to provide you with a correct and functional specification, which will conform to BS8102- 2009 Code of Practice for protection of below ground structures against water from the ground and building regulations. 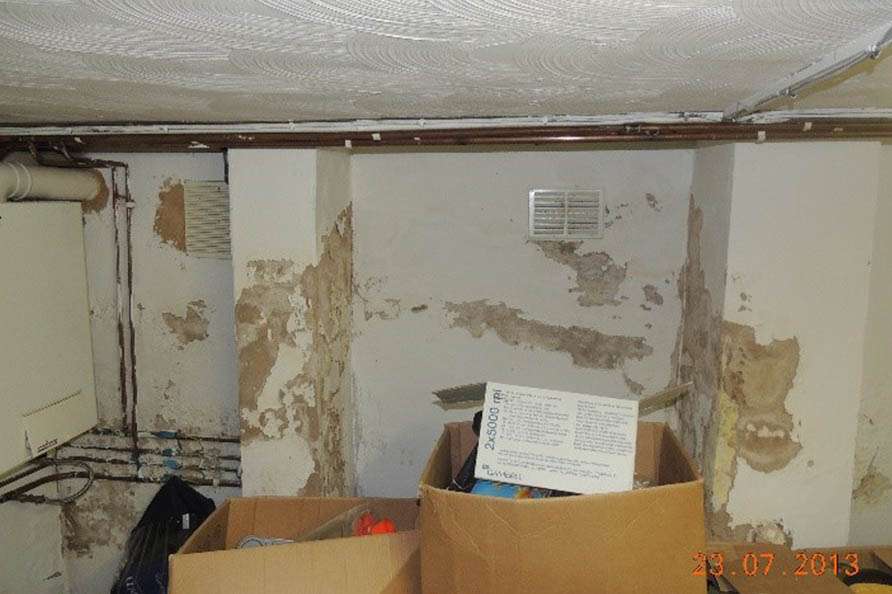 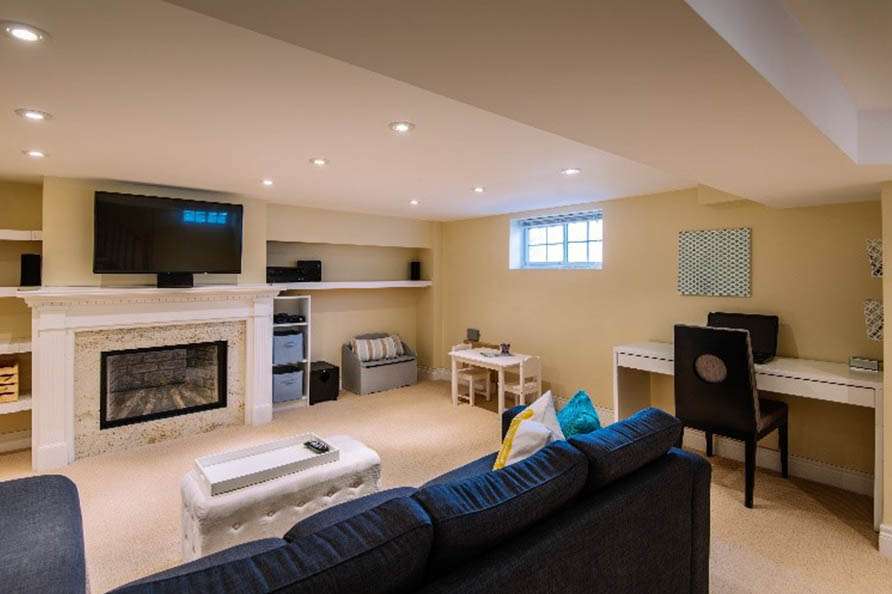 Converting an existing cellar beneath a dwelling from a storage area to habitable space usually only involves building control approval.

If you plan to have new window/door openings or external access or if you wish to create a fully self-contained unit then planning consent maybe required.

We offer a complete professional service, from the initial survey, planning, structural design and building regulations application, through to completion of the contract to Convert your cellar into an additional bedroom, games room, home gym or simply use for storage space.

The cost of a basement conversion is subject to a number of factors, if there is no change in the existing structure or ground levels, an estimated cost for waterproofing a basement with a water management ‘Type C’ system with plasterboard/ plaster and insulation would be £1000-1200 per square metre.

Lowering of the existing floor level and changing the internal wall design.

Lowering the existing floor level to increase to improve the head room or changing the layout of the basement walls and creating light wells/means of escape in case of fire, would incur further costs, which would require a site inspection and test pits excavating, to establish the soil and ground water conditions, estimated costs being £1000.-1500 per meter square.

Introducing natural light and ventilation into the basement by forming a lightwell / doorway can significantly improve the internal environment and atmosphere within the basement £5000.00

If underpinning is required to stabilise the structure/ foundations a structural engineer would need to be instructed, to provide the specification for building regulations, the cost of these work being subject to the extent and ground conditions. £1500.00 per meter

When considering a basement conversion, one point which is often overlooked by unqualified surveyors is the existing drainage systems installed, we will always recommend a drains survey is undertaken to establish were the existing drains run, their depth and condition. £300.00 per meter

The level of planning detail will depend on the size and technical detail of the basement, for a large or complex basement it is recommended full plans are drawn up for clarity, the cost for of plans and building regulations will depend on the value of the works being undertaken, estimated cost for an average basement being £1000.00.

Waterproofing and basement / cellar conversions are a significant investment and if undertaken correctly are an asset to your home. 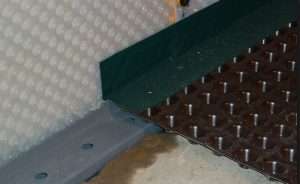 Waterproofing is a very specialist area and should only be undertaken by qualified and experienced contractors, who can offer you a professionally designed and specified bespoke waterproofing system, designed to BS8102:2009 by a CSSW qualified surveyor, not simply an ‘Approved contractor / builder’ which simply means the contractor purchases materials from Asupplier, they have not undertaken any industry recognised examinations, or gained qualifications.

The National Building Council NHBC and Premier Guarantee now also require that all new build basement waterproofing systems are designed by a CSSW Qualified Surveyor, not an approved contractor ask yourself WHY.

Your chosen contractor should offer you not just their own guarantee but also the option to purchase an independent insurance backed guarantee from a recognised scheme GPI  , to provide you with peace of mind for many years to come.

Olympic Construction are specialist in the field of below-ground waterproofing; converting the damp environments beneath peoples homes into a spacious dry habitable environments

Installing a waterproofing system alone, will only achieve a Grade 2 environmentle level, to achieve a Grade 3 habitable environment, control of the internal environment to the cellar or basement is required, in order to reduce the risk of dampness caused by condensation and poor air quality.

The British Code of Practice BS8102 ‘Code of practice for the protection of below ground structures against water from the ground’. Clearly sets out the environmental grades of dryness required which are set out in the the table below. 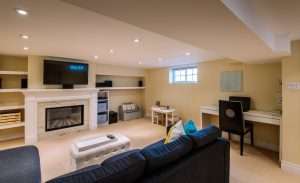 Water can penetrate a structure below ground level in two ways

Where the ground is not saturated, water will move through the capillaries of the ground and structure by capillary suction. When this form of moisture comes to the internal surface of the building, surface dampness and salts will be evident, but there will be no free flowing (flooding) water. Capillary moisture can enter a structure laterally where a wall is earth retaining, and/or it can rise up from the ground through floors or free standing walls within the basement, appearing as rising dampness.

Where the ground is saturated and hydrostatic pressure occurs, water will be pushed through the capillaries of the ground and structure. Where the water comes to the surface, the pressure behind it will force it into the property in the form of liquid water and flooding will occur.

Where a wall is earth retaining, penetration will be lateral through the retaining soil, if the water table is high

(such as when water is trapped in or there is a defective drain) or following heavy or prolonged rainfall, water will percolate down through the soil, this water will be under hydrostatic pressure and could flood the property internally. If there is no water pressure present, then penetration will be through capillary action and the property will not flood internally.

Methods to address the water ingress into the basement. 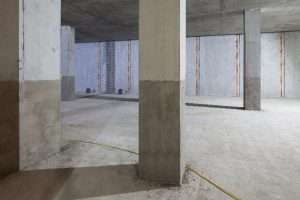 (Tanking) are modified renders and slurries applied to the internal face of the structure, these should be applied with caution and only designed and installed by qualified and experience operators, as they stop water at the point of entry, pressure can build up behind the membrane and it is important that the structure is capable of accepting the induced stresses which result. 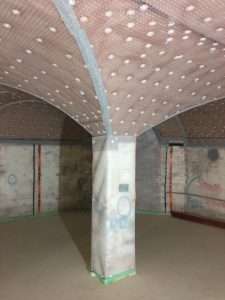 Water management systems do not stop water at the point of entry, so do not increase stresses in the structure which can happen with cementitious systems. The water entering the property is collected by means of a designed management system and diverted to a convenient point for removal by drainage or pumping. 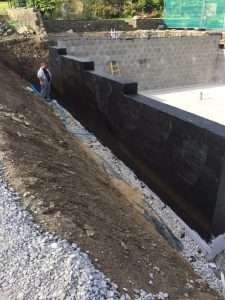 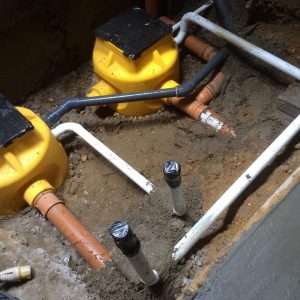 The correct commissioning of a Type C waterproofing system is essential to ensure the system designed, is working and able to work efficiently under flood conditions. It is considered at the point where the permanent sump pumps and associated components become operational, the system is fully functional. It should be undertaken by all competent waterproofing designers and installers, before undertaking closing in works.

To correctly test a water proofing system requires number of steps to be correctly followed, to ensure the system is at a point where it is ready to be commissioned and that any future responsibilities are clearly defined.

Therefore the contractor must have confidence that the system is fully functional, and that responsibility for the ongoing maintenance of the system has been clearly set out.

The necessary checks prior to the commissioning of a Type C system needs to include all components of the system and should not be restricted to mechanical parts. It should be remembered mechanical devices such as the pump will fail eventually.

It is therefore good practice to consider the service life of a pump and the client should be made fully aware of the life expectancy of the pump at the design stage and then again as part of the hand over pack at the point of commissioning.

Some modern pumping stations include intelligent monitoring systems, which will monitor the water levels, cycles of pumps, failures and more importantly predict when pumps are likely to fail.

Cellars and basements were not originally designed to be habitable areas and rarely benefit from effective levels of natural ventilation, so it is likely that some kind of additional ventilation will be required to control the air quality and conform to building regulations.

Additional ventilation can take the form of passive ventilation, humidity-controlled fans and heat exchange units. As Bpec qualified ventilation specialists we can advise, design, install, commission and sign off the ventilation system (requirement of building regulations) which will ensure your basement conversion remains dry and a healthy area to live. 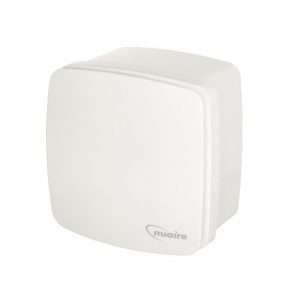 The level of dryness required needs to be established ‘Nothing is absolutely dry’, Water and water vapour will always exist, bound up in the building and in the air. However, a building will be perceived as being dry if the water present dose not pose a problem for the inhabitant or contents of the building, or cause damage to decorations.

The internal environment needs to be heated to the appropriate temperature, furthermore, excess humidity created by the normal activities of the occupants must be removed. This is normally done by ensuring there is adequate ventilation (natural or forced) in the area, although in extreme cases, air conditioning or dehumidification may prove to be necessary.

Correctly insulating the walls and floors of a basement conversion is required to reduce the risk of condensation and loss of energy, as well as being a requirement of building regulations. 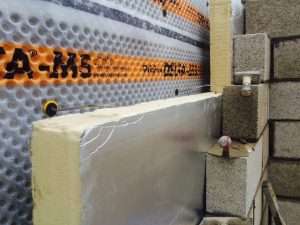 100% Closed Cell Extruded insulation is the recommended insulation product to be installed because they have negligible moisture absorption and high compression resistance, the correct location of the insulation and incorporated vapour control membranes are an important part of the basement design.

Olympic Construction have been undertaking waterproofing and basement conversions for over thirty years, but will still acknowledge there is a risk, things can go wrong. As members of the PCA we are able to offer long term Insurance Backed Guarantees (IBGs), provided by Guarantee Protection Insurance Ltd (GPI).

All guarantees are provided by the GPI which is the UK larges provider of specialist IBG, cover for both workmanship and materials and are transferable to each owner of the property for the term of the guarantee period.

The NHBC Waterproofing of basements and other below ground structures section 5.4.3 water proof design states the following as a requirement for a guarantee certificate to be provided. Waterproofing systems should be designed by a waterproofing design specialist. Designers who have successfully completed the Certified Surveyor in Structural Waterproofing (CSSW) qualification available from the Property Care Association (PCA) are generally acceptable to the NHBC.

Our work is backed by the Guarantee Protection Trust. https://www.property-care.org

If you have any questions please call us on Oldham 0161 633 9860 | Wilmslow 01625 900 800 or contact us and we will be happy to answer any of your questions or make arrangements to undertaken an inspection.
(Inspection appointments refunds are subject to a Minimum 24hr notice)